Wiley to Women's Magazines: Thou Shalt Not Commit Cover Lines

The hilarious Non Sequitur comic strip, drawn by Wiley Miller and syndicated to 700 newspapers, offers brilliant commentary on the issues of the day, mixing witty observations about human nature and contemporary issues.  A favorite periodic feature of the strip is "Life Review in Session," in which a St. Peter-type character sits in front of a huge computer as heaven's inhabitants recount the follies of their earthly life.


A strip published in newspapers this week tweaked women's magazines for their ubiquitous, and often ridiculous, cover line teasers.


That had to sting.  But the strip makes a point that the cover content of women's magazines, carried over to their web sites as well, reminds women that no matter how good they have it, there's always something about them and their lives that needs fixing.  For example:


9 Moves to a Tighter Butt


Heat Up Cold Winter Nights With These 25 Date Ideas


100 Amazing Outfits for Every Day


With all that listmaking, tip following, and idea implementing a reader would have to do, there'd be no time to do much else with her life, and no guarantee that the results would be what she hopes for.  With this tip mania, the magazines continue to promote an endless cycle of self-improvement, with a message that is subtly negative and potentially toxic to the self-esteem of women and girls who read them.
Posted by Sheila Gibbons at 10:30 AM No comments:

Where Are the Women? Press Club Panel Discusses How to Increase Sourcing, Commentary

The thorny and persistent problem of underrepresentation of women as news sources and sources of commentary received a thorough airing at the National Press Club Jan. 13.  A distinguished panel of journalists, ably moderated by Linda Kramer Jenning, Washington editor for Glamour magazine, discussed why this is and how it continues to bedevil editors, reporters and readers while also compromising the quality of journalism.

With poor gender balance, "You're not going to get the full range of opinions," said panelist Sally Buzbee, Washington bureau chief for the Associated Press. "I remember vividly during the Iraq war, the challenges of being able to talk to Iraqi women, and how one-sided that made much of our coverage."

But even without war and cultural barriers as explanations, women don't appear much in domestic news, either, as numerous content analyses have shown -- even when the subject matter directly affects them.

This panel discussion didn't offer a magic solution to how to solve the problem, but instead offered a spirited conversation about what is possible, what is being done, and how women can assert themselves as sources, reporters and commentators to occupy more of the real estate on news and editorial pages.  It's 107 minutes long and can be viewed here.

Posted by Sheila Gibbons at 12:17 PM No comments:

Brace yourselves for an onslaught of tastelessness come Super Bowl Sunday Feb. 2.  If the Jan. 5 NFL playoffs were any indication of the sexist and sexual themes that are coming in TV commercials, this year's Super Bowl will be a doozy.

First, there was has-been NFL player Terrell Owens being dissed by fans but seduced by the pool by under-dressed, over-siliconed women.  For mid-day on a Sunday, when this ad aired, the explicitly sexual behavior was a shocker.  And what was TO selling?  Besides his sexual prowess, that is?  A hamburger from Hardees, which needs to hire a new ad agency if this is the best they can do.  Watch it here. 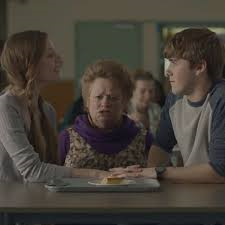 Then there was the mocking of motherhood by Old Spice body spray for men.  Here the theme was moms who just can't let go of their darling boys, taken to ridiculous and actually somewhat sadistic extremes in this commercial.  I don't know who would rush out and buy the product after seeing this commercial, but somebody ought to send flowers to Mom.
Posted by Sheila Gibbons at 10:35 AM No comments: