An Honest Look at Source Gender Balance in One's Own Reporting

Hats off to Adrienne LaFrance, who had a math whiz at the MIT Media Lab analyze a year's worth of her own reporting for gender bias in sourcing.  A feminist alert to the widespread pattern of male voices dominating news sourcing in every medium, she put her own work to the test -- and came up dissatisfied with her performance. In 136 articles, LaFrance mentioned or quoted 2,075 persons, of whom 25 percent were female, she says.  That put her right at the average for reporters worldwide, according to the Global Media Monitoring Study, which has been tracking these numbers for two decades, as have other groups before it.

LaFrance writes a thoughtful piece on the problem. "Underrepresentation of women in media is one of those topics that’s so big and so multifaceted that a lot of people don’t really know how to begin to talk about it, let alone do anything to make a difference," she says, adding that saying "Journalists are simply reflecting the imbalance that exists all around them" is a poor excuse that makes it possible for nothing to change."

She has written one of the most thoughtful pieces on the subject I've ever read.  She concludes that both sides of the equation have to work harder -- journalists to track down appropriate sources who are female and women being willing to be quoted.  LaFrance notes a reticence among women that is less of a problem with men she contacts for interviews -- she's not the first person to notice this or wonder why it is the case.  Her account is a good example of why we're still talking about this and why we need to get on with fixing the problem.
Posted by Sheila Gibbons at 1:54 PM No comments:

Why Are Women Still Being Told They Must Overcome Their Personality Traits to Succeed in the Workplace? 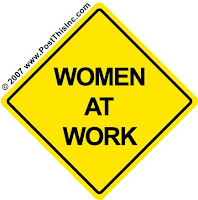 This is a discussion well worth having -- but it's amazing, and awful, that we're still having it.

The gender disparity in news media management and so many other fields persists and people at the top don't even seem embarrassed about it, let alone motivated to do anything about it.

So when Australian newspaper editor Kylie Davis unpacks the problem for us, lays out the research showing how well women manage life in general as well as their work place responsibilities, you have to wonder about the management decisions that leave so many of them behind.

Posted by Sheila Gibbons at 11:43 AM No comments:

A First For the National Book Awards

For the first time, the National Book Awards" "5 Under 35" picks are all women!  Read about them and their work here. The 5 Under 35 program, now in its eighth year, honors five young fiction writers selected by past National Book Award Winners and Finalists.  Congratulations to Molly Antopol, author of The UnAmericans; NoViolet Bulawayo, We Need New Names; Amanda Coplin, The Orchardist; Daisy Hildyard, Hunters in the Snow; and Merritt Tierce, Love Me Back.

Some highlights about this quintet, announced Sept. 12:

-- The group includes two Stegner fellows— Molly Antopol is a former fellow who now teaches at Stanford and NoViolet Bulawayo is a current fellow.

-- Molly Antopol’s story collection, The UnAmericans, is largely based on her family’s involvement in the Communist Party.

--  NoViolet Bulawayo was born and raised in Zimbabwe. She won the 2011 Caine Prize for African Writing and her novel, We Need New Names, is shortlisted for the Man Booker Prize.

-- Daisy Hildyard is pursuing a doctorate on scientific language at the University of London.

--  Amanda Coplin won the 2012 Barnes & Noble Discover Great New Writers Award for The Orchardist, for which she drew from her experience growing up in Eastern Washington.

-- Merritt Tierce received a 2011 Rona Jaffe Foundation Writers’ Award. Her first published story was selected for inclusion in the 2008 edition of New Stories from the South by ZZ Packer, an inaugural 5 Under 35 author in 2006. She is also executive director of the Texas Equal Access Fund, a reproductive rights nonprofit for low-income women.

A fine retrospective on the decline of newspapering and news distribution as we once knew it has been released by the Joan Shorenstein Center on the Press, Politics and Public Policy and the Nieman Journalism Lab, both at Harvard University.  Titled "Riptide: What Really Happened to the News Business," the analysis is based on interviews, some of which appear in this report in video form, with 55 media leaders who traveled through the transformation from legacy media methods to today's digital, on-all-the-time information world.  But once again, women represent a small segment -- only 10 percent -- of those interviewed.  Many media watchers are incredulous that this number could be so small in this day and age.  You can see the lineup of those interviewed and begin reading the report here.

"We started by identifying the institutions that we believed were central to the Riptide story — the change of news through the rise of digital technology, beginning around 1980. Then we sought to interview many of the key people at those institutions. At that time, they were, regrettably, overwhelmingly white and male.

"Riptide was always intended to be an organic project that would be expanded over time with other voices exploring more and more parts of this story. That’s why we created it as a website. We welcome suggestions for voices or topics that could now be added to Riptide. Please feel free to post them below or send them to us at Shorenstein_center@hks.harvard.edu."


Posted by Sheila Gibbons at 9:12 AM No comments: