"Turning Women into Drawings and Passing Them Off As Real"

Blogger Laura Willard, on her Upworthy site, posted a video that purports to show "the power of Adobe Photoshop" by converting a lovely woman into a Barbie-ish version of herself -- all with Photoshop software and a mouse.

"I want to show my daughter, over and over, why the images of so many women she sees aren't realistic," Willard writes. "And what I really want is for us to stop turning beautiful women into drawings and passing them off as real."

In 37 seconds, the woman in the video is made up, bewigged, and then with the wonders (or horrors) of Photoshop, has her contours reduced, her eyes enlarged, her mouth turned into a pout, her legs lengthened and her skin lightened.  The result is an all-too-familiar image type that dominates fashion and feature photography images of women and girls.  The nicest thing one can say about it is that the image is unhealthy.  The  more honest comment is that it's sick and feeds devastating thoughts about self-image.  See it for yourself.


Posted by Sheila Gibbons at 3:59 PM No comments: 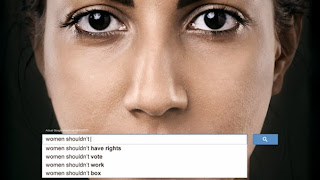 Adweek Magazine has published a powerful campaign by UN Women to demonstrate how insidious sexism is by how much of it is embedded in user searches.  Conducting an actual search on one day in September 2013, it became apparent that negative beliefs about women -- their rights, their image, their aspirations -- are so prevalent that Google's autocomplete can anticipate them and provide them as a search choice.

"These ads do a stellar job driving home the daunting fact that enough people around the world share these vile opinions that Google has come to expect them," Adweek says.  Check out the results in Adweek's article here.
Posted by Sheila Gibbons at 11:13 AM No comments:

Another veteran musical performer has weighed in with advice in the wake of singer Miley Cyrus's recent sexually explicit live and video performances.  Charlotte Church, invited to give the annual John Peel Lecture October 14 to broadcasting executives at Britain's annual radio festival, made some of the same points as Sinead O'Connor in cautioning young female performers about crossing over the line into performance pornography.

"The irony behind this is that the women generally filling these roles are very young, often previous child stars or Disney-tweens, who are simply interested in getting along in an industry glamorized to be the most desirable career for young women,” Church said in the lecture, as reported by The Telegraph. (No joke:  Miley Cyrus starred in the Disney Channel's "Hannah Montana";  another child star turned musical sexpot is Britney Spears, a veteran of Disney's "Mickey Mouse Club.")  "They are encouraged to present themselves as hyper-sexualized, unrealistic, cartoonish, as objects, reducing female sexuality to a prize you can win," Church said.  She endorses a system that would give age-appropriate ratings to music videos.

Church, 27, has described being whipsawed in her own career by differing visions of her sexuality as she went from a breakthrough classical vocalist at age 11 to an adult musical interpreter with crossover appeal. In an interview with the BBC, Church said that early in her career,  "There was a big clamour to cover my breasts as they wanted to keep me as young as possible. Then it became, "You should definitely get them out, they look great."

Church talks about this worsening issue for popular female musical performers, her own career, and women in music in this interview with the Women's Hour of the BBC, which happily includes many other women active in the music industry.
Posted by Sheila Gibbons at 1:47 PM No comments: