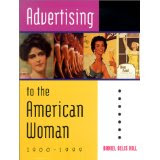 We've decided to put the best of the MEDIA REPORT TO WOMEN library online for sale.  Among the books are classic works (like the one shown here) and hard-to-find titles that capture the best work of researchers looking at the relationship between women/girls and the media.  We'll be adding other titles, some of a more general nature in communication and select trade books, over time.  We think this a wonderful opportunity for scholars to acquire books in first-rate condition.  Please visit the YouCanReadHere storefront here.
Posted by Sheila Gibbons at 10:45 AM No comments:

Get Mad AND Get Even 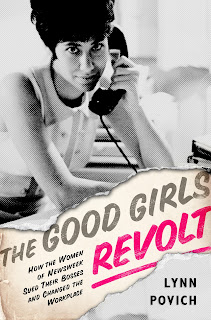 Journalist Lynn Povich, author of The Good Girls Revolt: How the Women of Newsweek Sued their Bosses and Changed the Workplace, last week talked with Newseum interviewer John Maynard for the Newseum's YouTube channel about the historic fight Newsweek women waged in 1970 for equal opportunity at the magazine.  Povich was among the leaders of the group fed up with Newsweek's practice of steering women into low-paid researcher jobs and men into the higher-paid and higher-status correspondent and editor positions.  In a frank interview she described instances of sexual harrassment, including stalking, along with the dead-end job pattern.  Sixty women ended up suing the magazine for discrimination.  Their war room?  The ladies' room at the magazine. It took a second lawsuit for real progress to be made.  Povich became Newsweek's first female senior editor in the magazine's history.  You can see her interview with Maynard here.
Posted by Sheila Gibbons at 12:16 PM No comments:

Hot off the University of Pennsylvania Press: The Jet Sex: Airline Stewardesses and the Making of An American Icon takes readers from a time when the first flight attendants had to be trained nurses to today, when they have to be intensively trained for security as well as for cabin service. In between were the years when they were hyped as gentlemen’s companions in airline advertising that suggested the business traveler would get some eye candy with his martini.


Victoria Vantoch’s book is a welcome history of a career that got a lot of women off the farm and out of dull offices, promising glamorous travel (never mind the low wages) and the opportunity to meet “interesting people” (i.e., potential rich husbands during the years flight attendants were required to be single). Vantoch shows how ad agencies pushed the sexualization of flight attendants in advertising, with the airlines cooperating by vamping up the stewardesses’ apparel. Vantoch’s book contains a terrific collection of ads that show how the military-style stewardess uniform was shed in the late 1960s in favor of mini-dresses, “hot pants,” and go-go boots. The advertising copy made sure you didn’t miss the point:  An “I’m Cheryl. Fly me” ad showed a National Airlines stewardess in close-up, with a come-hither look. In 1974, Continental Airlines introduced the slogan, “We really move our tails for you.”  Porn movies featuring stewardess characters inevitably followed.

The airlines' sexual sell in the 1960s and 1970s was intensifying as the women's movement was gaining ground.  Inevitably, there was a collision.

Flight attendants rescued their dignity through their union, the Equal Employment Opportunity Commission and legal complaints. They eventually succeeded in striking down the no-marriage rule, the no-pregnancy rule, the age limit, and unreasonable height and weight restrictions.  And the you-must-be-female rule, too.  The steamy airline advertising faded away.  Finally.
Posted by Sheila Gibbons at 5:03 PM 1 comment:

On the Story, In Her Wedding Gown

Television anchor Chen Ying was beautifully dressed for her wedding this past weekend, but the day didn't turn out as planned.  It found her reporting the story of an earthquake not far from where her wedding was to be celebrated.  Stilll in her bridal finery, she interviewed survivors and reported from the scene.  No word from the groom, but her quick response to the disaster brought a lot of admiring comments from her audience.  See the ABC News report here and a photo of Chen Ying right here. 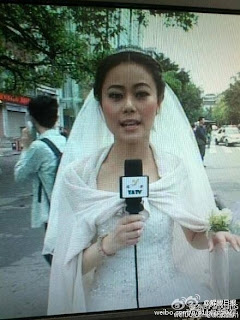 Beauty product manufacturer Dove has, for several years, had a campaign to recognize and celebrate the natural beauty of its customers.  In this powerful video produced for Dove, we're reminded of how artificial standards of beauty pushed by the fashion, makeup, and personal care products industries, and much of the media supported by them, have distorted women's and girls' views about themselves.  Share widely.
Posted by Sheila Gibbons at 9:20 AM 1 comment:

What Can We Expect from the New York Times Book Review's New (Female) Editor?

New York Times Book Review features editor Pamela Paul is vaulting into the editor's seat in May after being hired in 2011 to handle reviews of children's books.  Paul is the Times’ 20th book editor and only the second female book editor. The first was Rebecca Sinkler, who served from 1989-1995.  The question:  Where will she take the NYT Book Review, which typically publishes more than twice as many male as female authors and a dearth of minorities?  Some good insights here in her exchange with Poynter's Mallary Tenore.

Hillary's Future: Do We Have to Talk About Her Hair?

Maureen Dowd penned a column speculating about former Secretary of State Hillary Rodham Clinton's political plans, published in the New York Times April 7.  While full of intriguing insights, why, oh, why did Dowd have to dish about her hair?

"Hillary jokes that people regard her hair as totemic, and just so, her new haircut sends a signal of shimmering intention: she has ditched the skinned-back bun that gave her the air of a K.G.B. villainess in a Bond movie and has a sleek new layered cut that looks modern and glamorous."

Dowd also informed us that Clinton was wearing a hot pink jacket and black slacks.

Still waiting for the day when coverage and opinion about powerful women doesn't always include a fashion statement.


Posted by Sheila Gibbons at 8:47 AM No comments:

Why Sexism Lite Is Still Sexism

Kudos to Dan Solomon for posting on The Frisky about why men who abet sexism (in this case, authoring an article called "The Top 40 Hottest Women in Tech") shouldn't be surprised to be met with a backlash that years ago they wouldn't have encountered.  Solomon also suggests that men who think they're engaging in a little harmless ogling in print need to take another look at the environments they work in -- and at themselves.
Posted by Sheila Gibbons at 2:24 PM No comments:

Battle of the Bylines: Bright Spot for Women in Magazine Award Nominations

Mother Jones co-editor Clara Jeffery keeps a close eye on the issue of byline parity for female and male writers.  Last year, she and co-editor Monika Bauerlein lamented the poor showing of women writers in nominations for the National Magazine Awards.  Yesterday, she reported that nominations of women are up sharply:

"Whether by chance or by collective soul searching, this year has seen dramatic improvement within the reporting and writing categories (public interest, reporting, feature writing, essays and criticism, columns and commentary, and fiction). Last year, women were only nominated for seven of the available 25 slots, and were completely shut out of four categories. This year, they've garnered 17 of the available 34 spots, and women are nominees in every category."

Of course, this is just one awards competition for one year, and being nominated isn't the same as winning.  But it's great news and I hope it's a sign of things to come. The winners will be announced May 2.
Posted by Sheila Gibbons at 12:46 PM No comments:

So Here's How It Should Have Read in the First Place

The New York Times, having stirred outrage in its obituary of scientist/inventor Yvonne Brill, quietly amended the obituary for its archives in response to comments by readers and media watchdogs.  Brill, inventor of a propulsion technology in wide use today, was described in the obit's first line as an inventor of "a mean stroganoff" -- not of the system she devised that keeps satellites in orbit.  Many readers felt that the early emphasis in the article on her domestic abilities took away from her considerable professional achievements, and failed the test of comparability with a hypothetical obituary of a male scientist. Would such an obit, of a groundbreaking inventor, lead off with the beautiful results of his lawn mowing? You can see the edits made to the NYT's article on Brill here, thanks to NewsDiffs, which tracks how articles are modified by their editors.
Posted by Sheila Gibbons at 2:16 PM No comments: